By Seth Morgan on June 7, 2016 in Consumer, Economics, Energy, Environment

The 2015 Volkswagen emissions measurement scandal has so far caused the resignation of VW’s CEO, a long list of lawsuits and the creation of an $18 billion damages fund, placing it in the dubious company of FIFA, Takata airbags, and Turing Pharmaceuticals as one of the most-maligned corporations of 2015.

When news broke last fall that Volkswagen had been caught cheating on emissions tests for its diesel cars, disappointment was palpable among a particular kind of car enthusiast. VW’s line of TDI diesel vehicles were a niche but growing product in the United States, often embraced by conscious, data-tracking obsessives in pursuit of the perfect balance between low emissions and high performance.

Volkswagen’s marketing team worked hard to convince consumers that the bad old days of smog-causing dirty diesels were over. These were not your grandpa’s diesel cars, VW said. On their way to overtaking Toyota at the top of the auto industry leader board, Volkswagen aggressively promoted their diesel cars as a green choice Botek (2015).

The company even promoted a series of videos entitled “TDI Truth and Dare” in which shiny new “clean diesels” were compared to the 70s-era vehicles many consumers associate with diesel sedans. Most viscerally, one video featured an actor cheerily making a cup of coffee with a coffee filter ostensibly taken from the tailpipe of a VW Touareg TDI. The message was clear: these vehicles are good for the environment and fun to drive. The perfect balance.

That balance was upset by the September revelation that Volkswagen had installed “defeat devices” that turned on emission controls while the car was being tested, then turned the control mechanisms off when the test was over. This allowed the vehicles to pass tests of nitrogen oxide emissions–a precursor to ozone pollution–with flying colors, without having to compromise on acceleration and fuel efficiency during real-life driving Davenport and Ewing (2015).

Absent such defeat devices, automobile manufacturers face a trade-off between emissions and performance, which includes acceleration and fuel efficiency. To represent this trade-off simply I will only consider particulate emissions and fuel efficiency. Economic theory suggests that consumers’ utility–the enjoyment or intrinsic value they derive from the products they consume–is based on the bundle of characteristics the products contain Lancaster (1966).

To keep things simple let us equate fuel efficiency with performance. Then consumers’ preferences for fuel efficiency and low particulate emissions can be shown by the utility curves in Figure 1, which represents the rate at which they would trade low emissions for fuel efficiency. They will maximize their utility at the place where their budget, the straight diagonal line, intersects the utility curve. This represents the best balance the consumers can make between the two attributes, given their preferences and budget. 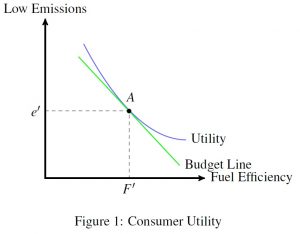 However, emissions regulations mandate a minimum standard, represented by the dashed line in figure 2, essentially require car producers and consumers to trade away some performance for a minimum amount of low emissions. Volkswagen was able to sell millions of vehicles on the promise of a beneficial trade-off, where consumers could meet the required level of low emissions while still enjoying high fuel efficiency, consuming at point B in Figure 2, and continuing to enjoy utility level U0. 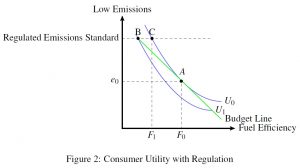 The balance represented by point B might be technically possible, but apparently not at the price quoted to consumers. With emissions standards mandating a fixed amount of allowable nitrogen oxide, absent the unrealistic test results provided by the defeat device consumers would have to accept either a rise in the car’s price or a drop in fuel efficiency. Either way the utility they could get for their budget would fall to curve U1.

The value of the lost utility represented in the move from U0 to U1 can be roughly estimated by the resale value of Volkswagen diesel vehicles, which fell by 13 percent after the defeat device scandal Shah (2015). The resale value of the diesel Jetta fell by $1,653. Subtracting the amount that the standard gasoline Jetta lost in value would isolate the effect of the diesel car’s characteristics as opposed to the damage done to the VW brand. This yields a drop of $1,434, still approximately 12 percent of the average resale value.

This illustrates why Volkswagen had such a powerful incentive to cheat on emissions tests. By claiming to have a high level of fuel efficiency and low emissions they were offering consumers $1,434 in extra value which they did not have to pay to actually produce. This represents a considerable competitive advantage.

Economic theory would predict that auto manufacturers would provide low emissions at a price equal to the cost of each marginal improvement in emissions they make. At some point in their decision making, the engineers at VW must have faced a point where the marginal price of improvements to emissions was higher than the cost of installing defeat devices, which was simply a fixed investment in software. 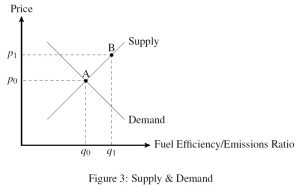 Volkswagen was able to claim to offer a fuel efficiency/emissions ratio at point B without
bearing the cost of developing the technology represented by the upward sloping line between A and B. The square made by the dashed lines represents the value of the fuel efficiency/emissions ration which VW claimed they had achieved, which was likely in excess of what the market would have born if the real cost was reflected in the car’s price.

Thanks to the defeat device VW was able to offer a perceived level of efficiency equivalent to point B, but at the price point associated with A. Thus the difference between the larger rectangle at B and the smaller rectangle at A is the illusory value which Volkswagen was claiming it had engineered into its diesel vehicles. Once the
EPA detected the defeat devices this value essentially vanished into thin (yet increasingly polluted) air.

The Volkswagen scandal offers some insight into the way in which producers have an incentive to evade emissions regulations, and the manner in which consumers face differing trade-offs depending on their understanding of a product’s characteristics. For the regulators at the EPA it means that up to 1 million tons of NOx beyond the legal amount entered the atmosphere between 2009 and 2015 Topham et al. (2015). But for owners of Volkswagen vehicles the scandal simply means they were promised more than they received. Millions of consumers are stuck with low utility at high cost, taking this particular problem out of the hands of economists and into the eager hands of lawyers.

Botek, A.M. 2015. “The VW Diesel Scandal: Why it Matters to Marketers – IMPACT Marketing and Public Relations.”

Seth Morgan is a master's degree candidate in the Department of Agricultural and Consumer Economics in the College of Agricultural, Consumer and Environmental Sciences at the University of Illinois.
View all posts by: Seth Morgan→

Some Strings Attached: Cash Transfers and Brazil’s Continued Response to Poverty
Food Waste: An Introduction to the Issue and Questions that Remain
Policy Matters is a forum to communicate research-based analysis on current issues to help inform policy and policy makers.