By QuanGang Zhou on February 10, 2016 in Consumer, Food and Nutrition

Conventional pharmaceutical companies have a specific business strategy. They usually stay unprofitable for decades until their drugs are approved by the Food and Drug Administration to enter the market. Then they start to raise their drug price gradually at a rate above inflation every year. For instance, according to Deutsche Bank, Merck and Pfizer raised list prices an average of 13 percent in 2014 and 8 percent until the third quarter this year. At last, they will spend about 15 to 20 percent of sales on research and development for new drugs.

However, this model has been recently disturbed by some new players, namely Valeant Pharmaceuticals International and Turing Pharmaceuticals. For one thing, Valeant has been notorious for repeatedly buying up existing drugs and raising prices aggressively. In 2015, Valeant raised prices on its brand-name drugs an average of 66 percent, about five times as much as its closest industry peers.

Meanwhile, the company has been cautious about developing new drugs, devoting only 3 percent of its sales on research and development. For another, Turning Pharmaceutical went a step further. It acquired Daraprim, a 62-year-old drug to treat parasitic infection, in August and abruptly increased its price from $13.50 to $750 per tablet. Martin Shkreli, the founder and CEO of Turing, claimed they would use the extra profit to develop better treatments for toxoplasmosis with fewer side effects.

Protests against these pharmaceutical companies emerged nationwide by insurance companies, lawmakers, and patients. Some presidential candidates also seized on the issue. Hillary Clinton called for efforts to control “price gouging” after a public outcry over the actions of Turing Pharmaceuticals. Senator Bernie Sanders also sent a letter to Turing, demanding information on the price hike. To address public outrage, Valeant and Turing defended themselves, saying that some old neglected drugs sell for far less than newer drugs for the same diseases.

Furthermore, list prices are typically not what Medicaid and some hospitals pay after discounts and rebates are negotiated, so the impacts of the price spike are exaggerated.

Unlike most countries, there is no price control on drugs in the United States, thus pharmaceutical companies here are greatly encouraged to manipulate their drug price to bolster revenues and profits. Before introducing a model, let’s take a look at the substitution effect and income effect caused by the price change:

1. Substitution effect: as a repeatedly successful strategy, the underlying mechanism to pick drugs and their manufacturers by Valeant and Turing are extremely strict. For example, there are alternative treatments for Daraprim, but the data to support their efficacy are less. Besides, instead of through drugstores, Daraprim is currently under controlled distribution, which makes it harder for industry peers to get the samples and make generic copies. The sales of the drug are also too small to interest major players, who will not wait two to three years for the approval from the FDA to start selling such a product in any cases. Therefore, even though most of the drugs (e.g. antibiotics and anesthetics) with gigantic price increases are old, and their patents have long expired, generic alternatives did not pop up. In a word, consumers’ preference for these drugs ends up so rigid that there is only minor substitution effect in the short run.

2. Income effect: regardless of their sky-high nominal expenditures of drugs, patients are shielded from price spikes by insurance and financial programs offered by drug manufacturers. There is also evidence that the discounts between list prices and the amount that health plans actually pay are increasing. Hence, the increase in out-of-pocket expenditures for patients is not significant. However, in the long term, those costs will be paid by insurers, hospitals, and taxpayers, which leads to higher premiums and co-payments and cuts real income for everyone. On the other hand, patients are worried that insurance companies will stop covering these drugs, as some of them have already done. To summarize, neither income effect nor substitution effect due to the price hike is significant in the short run (also illustrated in Figure 1). What’s more, based on the industry practices and consolidations, Valeant and Turing could act like contestable monopolists in certain specialty drug markets, setting marginal revenues equal to marginal costs (instead of drug prices equals to marginal costs). 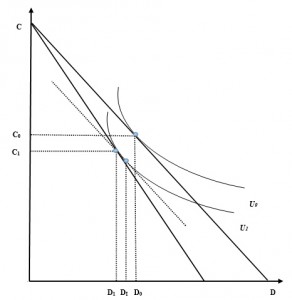 Figure 1: Assume patients only spend their money on drug D and other consumables C. In the short run, because the expenses on the drug are shielded by insurances and there is little choice of substitute, both income effect (D0 to DI) and substitution effect (DI to D1) are weak.
Now we can build a partial equilibrium model to infer the distributional effect of these price increases. Given our previous analysis, the demand for the drugs should be highly inelastic, which is embodied in a steep demand curve. Likewise, the elastic supply curve will be flatter. For simplicity, we would assume both of them are linear. The equilibrium before the price rise was at (P0, Q0). Consumer surplus was area ABCDE, whereas producer surplus was area FGHI (Total Revenue FGHIJK minus total cost JK). 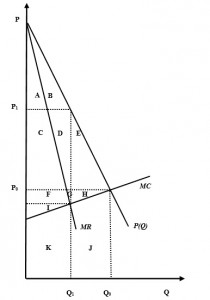 After the price rise, generic companies would increase the drug price to P1 by cutting back production to Q1 where marginal cost and marginal revenue intersected. Total cost of producers would be decreased to area K, and their revenue would switch to area CDFGIK, generating a new producer surplus CDFGI. Consumer surplus would shrink to area AB. Area EH became the deadweight loss.

According to Table 1, we would like to conclude with three interesting observations:

1. There is a huge loss of consumer surplus (indicated by area CDE) because of the price hike, which in turn revealed the fact that benefits brought by the drugs were previously underestimated. We would further guess that the pharmaceutical sector has been fully aware of this, which explained the industrial practice to raise drug prices year after year to redistribute welfares. The original low price is actually a part of their business strategy to cultivate new market and patients’ reliance on the drug.

2. The variation of producer surplus is represented by area (CD-H). We could prove it is positive within a couple of sentences. As the supply curve is the increasing section of the producer’s marginal cost curve, area H will be smaller than area FG. Since demand is more inelastic than supply, area FG will be smaller than area CD. Thus, area CD will be much bigger than area H. In other words, the influence of the price hike (indicated by area CD) did boost the genetic company’s revenue.

This is supported by Valeant’s regulatory filing that admitted its growth in the United States and other developed markets “was driven primarily by price” rather than increased volume. A report issued by a stock research firm Sector & Sovereign Research also argued that, instead of a strong organic growth, it was the 93 percent pricing gains that offset Valeant’s 39 percent volume declines, yielding a net sales growth of 55 percent in the past year. At last, because area CD, which previously belonged to patients, was reallocated to producers such as Valeant and Turing, it would eventually become a burden for every insurer and taxpayer in the form of higher premiums and co-payments.

3. The price hike gave rise to a deadweight loss EH. As we have illustrated, area H will be smaller than area E because demand is more inelastic than supply. So patients also suffer more than the drug manufacturer in deadweight loss. Obviously, this imperfect competition (monopoly) in specialty drug markets will result in inefficiency, benefitting no one but shareholders and management of Valeant and Turing. Specifically, based on company’s profit and stock performance, Valeant paid its five highest-paid executives $123 million in 2014 (1.5 percent of sales). Before the national outrage, its stock was trading for more than six times as much as it was five years ago, a meteoric rise that similar to its price strategy. For another, Martin Shkreli, the former hedge fund manager and current chief executive of Turning, acknowledged that he owned position in the pharmaceutical industry.

The principle and priority of these two enterprises are crystal clear.
Unfortunately, this controversial and unethical profit maximization practice also has a flip side. Worried about possible government action to control pharmaceutical prices, the Nasdaq Biotechnology Index dropped 4 percent right after the price hike. Meanwhile, a similar price increase for a tuberculosis drug was rescinded due to pressures from investors, industry peers and policymakers. In less than two months, a drug compounding pharmacy started to offer $1 alternative to Daraprim, even though witnesses at a hearing of the Senate’s Special Committee on Aging were reluctant to recommend more use of compounding because such drugs are not approved by the FDA and have had safety issues in the past. However, we believe that government’s regulation combined with the power of invisible hand are gaining momentum, which would eventually mitigate and eliminate this short-lived monopoly.

a graduate student in the Department of Agricultural and Consumer Economics in the College of Agricultural, Consumer and Environmental Sciences at the University of Illinois
View all posts by: QuanGang Zhou→

Questioning the Final RFS Rule, Part 3: Reasonableness of the Interpretation
The Potential Implications of the False Belief that SNAP Participants are more likely to be Obese than Eligible Non-Participants
Policy Matters is a forum to communicate research-based analysis on current issues to help inform policy and policy makers.