By Kenneth Olson on January 7, 2016 in Agriculture, Economics, Environment

An intricate system of basins, channels, and levees called the Headwaters Diversion carries water from the eastern Missouri Ozark Plateau to the Mississippi River south of Cape Girardeau. The system protects 1.2 million acres of agricultural lands in southeast Missouri from both overflow from the Mississippi River during flooding events and from Ozark Plateau runoff. Historical and more recent extensive rainfall and subsequent flooding prompted University of Illinois researcher Ken Olson to look more closely at where the excess or diverted water goes. 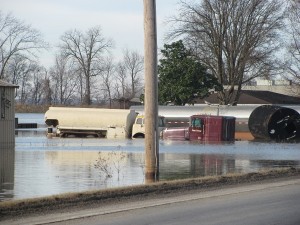 “There is a need for additional floodwater storage in the confluence area of the greater Ohio-Mississippi Rivers,” says Olson. “A regional effort on both sides of the Ohio and Mississippi Rivers is needed to strategically identify floodplain areas that could provide temporary water storage and policy incentives for landowners of low-lying lands to profitably invest in crops and income alternatives.”

Olson and his colleagues are studying the levees, diversions, and floodways, which for the past 200 years have allowed land conversion from wetlands to agriculture. “It has substantively altered the hydrologic cycle of the region,” he says. “The Little River levee and Little River Drainage District Headwaters Diversion channel built in the 1910s successfully permitted the drainage of the 1.2 million acres Big Swamp in southeast Missouri. However, it also had the unintended consequence of increasing the peak flow of Mississippi River water south of Cape Girardeau through the Thebes gap and south to Helena, Arkansas, a distance of approximately 360 river miles.

“When the Ozark uplands and Francois Mountains experience above-average rainfall for extended periods of time, the additional runoff transported by the diversion channel increases the chances of Mississippi River levee breaches south of Commerce, Missouri, and adds to the peak river height at the confluence of the Ohio and Mississippi rivers.”

Olson says the increase in Mississippi River peak flow placed additional river pressure on levees and led to increased flooding, especially during the floods of 1927, 1937, 2011, and 2015-2016. 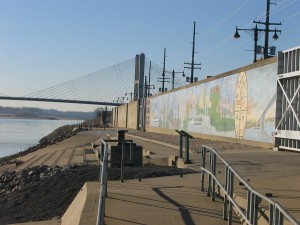 “Illinois farmers built the Fayville-Len Small levee that breached in 1993 and 2011,” Olson says. “It breached a third time on Jan. 2, 2016, when the Thebes river gage reached a record 47.7 feet –14.7 feet above flood stage. As of Jan. 5, the farmland, homes, and roads were still under floodwaters.”

“Missouri Ozark Plateau Headwaters Diversion engineering feat” was written by Kenneth R. Olson, Lois Wright Morton, and David Speidel. It is published in the Journal of Soil and Water Conservation. Olson is a researcher in the Department of Natural Resources and Environmental Sciences in the College of Agricultural, Consumer and Environmental Sciences at the University of Illinois.

The full text of the paper is available at http://www.jswconline.org/content/71/1/13A.full.pdf+html.

Funding was provided by the North-Central Regional Project No. NCERA-3 Soil Survey, the University of Illinois College of Agricultural, Consumer, and Environmental Sciences, Iowa State University, and the National Great River Research and Education Center.

Holiday Spirits: Notes from the Bourbon Trail
Livestock program breaks the cycle of hunger in Zambia’s Copperbelt
Policy Matters is a forum to communicate research-based analysis on current issues to help inform policy and policy makers.